Electrochemical sensors operate by reacting with the analyte and producing an electrical signal. Most electrochemical gas sensors are amperometric sensors, generating a current that is linearly proportional to the gas concentration. The principle behind amperometric sensors is the measurement of the current-potential relationship in an electrochemical cell where equilibrium is not established. The current is quantitatively related to the rate of the electrolytic process at the sensing electrode (also known as working electrode) whose potential commonly is kept constant using another electrode (the so-called reference electrode). 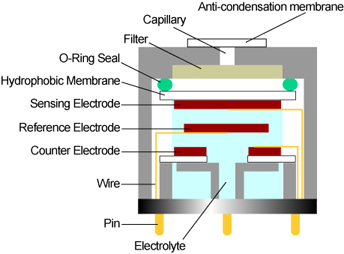 A MEMBRAPOR electrochemical gas sensor works as follows: Target gas molecules that come in contact with the sensor first pass an anti-condensation membrane which serves also as a protection against dust. Then the gas molecules diffuse through a capillary, potentially through a subsequent filter, and then through a hydrophobic membrane to reach the surface structure of the sensing electrode. There the molecules are immediately oxidized or reduced on active catalytic sites, consequently producing or consuming electrons, and thus generating an electric current.
It is important to note that with this approach the amount of gas molecules entering the sensor is limited by the diffusion through the capillaries. By optimizing the pathway, in accordance with the desired measurement range, an adequate electrical signal is obtained.
The design of the sensing electrode is crucial in order to both achieve a high reactivity towards the target gas and to inhibit undesired responses to interfering gases. It involves a system of three phases: solid, liquid and gaseous, and all are involved in the chemical recognition of the analyte gas. MEMBRAPOR is passionately dedicated to tailor this system and obtain high-performance gas sensors.
The electrochemical cell is completed by the so-called counter electrode which balances the reaction at the sensing electrode. The ionic current between the counter and sensing electrode is transported by the electrolyte inside the sensor body, whereas the current path is provided through wires terminated with pin connectors.
Commonly, a third electrode is included in an electrochemical sensor (3-electrode sensor). The so-called reference electrode serves to maintain the potential of the sensing electrode at a fixed value. For this purpose and generally for the operation of an electrochemical sensor a potentiostatic circuit is needed.

The output signal of a MEMBRAPOR gas sensor corresponds to the concentration of a gas rather than to its partial pressure. Hence, it is possible to use a MEMBRAPOR sensor at different altitudes or even underground, independent at which atmospheric pressure the device was calibrated.
A deeper and scientific explanation of the sensor output and the pressure dependence can be found in the document MEM4.